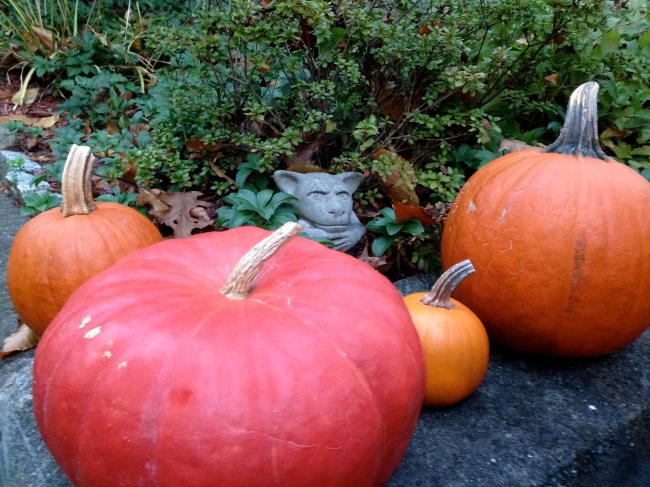 Despite the fact that my children are grown, I still rush out to buy my pumpkins each Halloween. Rob and I rummage through the piles until we find our perfect one. We each eye the other’s choice with a mild slice of pity, as if to say, “Too bad you didn’t get the one I found.”

Everyone loves pumpkins, even the hooligans who sneak into your yard under the cover of darkness and smash your jack-o-lanterns. I’m sure they would never smash their own pumpkins. People can’t help falling in love with pumpkins. Pumpkins are the vegetable with personality. So much personality that we carve and paint faces into them in an attempt to bring out their true identity.

Growing up in a flat northern Illinois landscape, one of my favorite memories was our annual trip to a small farm less than a quarter mile from our suburban home. The pumpkins had already been harvested and were spread out in size order ranging from 5 cents for the smallest, up to two dollars for the largest. I usually picked out one that cost a dime. It was easy to carry and I could tell it loved me back. 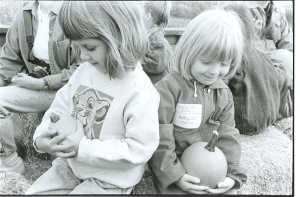 Thirty-five years later, when my own daughter traveled to a pumpkin patch on a school trip, I recognized the instant bond she and her friend had made with their personal selection. I asked my daughter why she had picked out that particular pumpkin.

“Because this is my baby,” she answered as she kissed it.

As a young boy, my son had pumpkin red hair and spent his childhood quests for the perfect pumpkin camouflaged among his choices. Here was proof that we had pumpkin in our genes. 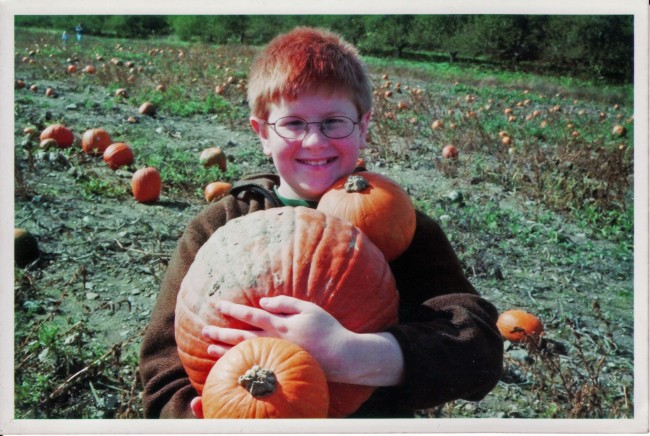 Rob’s affinity for pumpkins ran so deep he decided to impersonate one when he was a child and spent the better part of one Halloween with his head crammed into a plastic pumpkin shell. When I first saw this photograph I thought, “I better marry this man.”

The first year we were married we lived in Brooklyn and when October rolled around we set out in search of pumpkins. We found an old Italian woman selling pumpkins from her vegetable stand.

“How much?” I asked the vendor.

“What?” The lady squawked at me in a thick accent.

“How much are the pumpkins?” I tried again.

She rolled her eyes. “You tell me which ones you want,” she said sucking her teeth and inhaling, “and I tell you how much.”

“Uh, you tell us how much and I’ll tell you which one we want,” Rob said.

Needless to say we didn’t buy any from her. But I felt a little sad and guilty. Sort of like someone who goes to a pet shelter to adopt a cat but leaves empty-handed. Those pumpkins deserved better than her.

So far this year we’ve brought home five pumpkins. Three traditional orange pumpkins, a Cinderella pumpkin and a white one also known as a lunar pumpkin. The lunar pumpkin reminds me of a relative. He sits on the kitchen table and keeps me company at 6:15 in the morning as I drink my tea and read the newspaper. I keep thinking about putting him outside with the others but I can’t bear to part with him.

The image is courtesy of Treasure Hunt Design.

I have been waiting my whole life for my real life to begin. There is always a lingering distant opportunity of something better. Whenever I travel I see the latent possibilities of what life would be like if I only lived there. I see where I would shop, walk to yoga classes, drop off my dry cleaning and eat. I watch myself through the glass as a happy customer in the window seat enjoying a glass of Malbec with smiling friends. I am well dressed, I am thin, I am popular. I am famous. Then we go home.

It is an odd feeling that certainly doesn’t fill every waking moment but it’s out there. Since late August I have been in Collegeville Pennsylvania-twice, Seattle, Baltimore, and Tampa. Each time I return home I feel three things. The lost potential, relief at the sight of my own bed and the weight of the work that has been left undone. Doing my chores helps to ground me back into my routine. It reassures me that this is my life and it started long ago. As the days between trips add up I start to forget about any fantasy.

Two weeks ago after returning from a trip we put both the yard and house back in order. I stumbled to bed exhausted and stubbed my toe.

Rob ran downstairs and fetched a bag of ice.

“They can’t do anything for a broken toe,” he said, laying the ice pack over my blue toes and handing me two Motrin.

“Just gotta suck it up.”

After a few days of rest and ice everyone expects you to get back to business. It’s not a big enough injury to curry favor but it nags at you and impedes everyday activities that you still seem to be able to do. You hobble off to work and home again. Only now the dust collects in the corners and leaves pile up outside. You groan at the exertion it will take to simply gather up the pieces of the Sunday paper spread across the living room floor.

My stepfather called and said it best. “A broken toe is nothing more than a nuisance.”

I repeated that all week long when people shook their heads in understanding as I dragged my foot along. “Just a nuisance,” I said, to let them off the hook. They are also tired of my toe.

I collapsed late Friday afternoon on a kitchen stool and stared out at the lake. The distance of the dock is foreboding and off limits. It may as well belong to someone else. I try to remain satisfied with the view but find myself daydreaming about my real life that just hasn’t started yet.