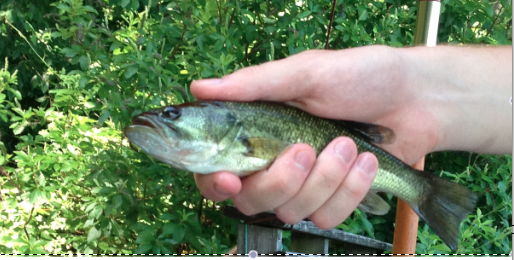 When my son came home for a weekend visit he  announced he had purchased a fishing license and went out in search of fishing spots on the weekends from his job with the city of Baltimore.
“Fishing?” I exclaimed. His interest surprised me because he had grown up on a lake, which we still live on, and hadn’t fished since his first catch.
His previous abandonment of fishing occurred about a week after we moved into the new house, which he had practically begged us to buy precisely because of his ten-year-old dreams of pursuing this hobby. My husband took him out in the rowboat with their freshly purchased poles and lore, and they caught a small bass.
They brought it up to the house for dinner and all of us stood speechless as my husband demonstrated the ruthless process of just how to clean and filet a whole fish. He then dropped a hunk of butter in a cast iron pan and fried it. My son looked down at his plate, up to the water, and declared that he would never fish again. “So much for living on a lake,” I said.
But now with his renewed grown-up interest I was eager to join him. We went on a rare trip to Wal-Mart on the Fourth of July. I looked around at the losers walking around Wal-Mart on a holiday and realized that I, too, was now lumped into this category. My son came to the store with what he called a well-researched list of supplies and carefully selected each part necessary for his new sport. Just before we went to pay I noticed a shrink-wrapped package boasting “Everything you need to lake/pond fish” for only $29.99. I bought it. If my son was going fishing, then by god so was I.
My equipment was inferior, but was worth the resulting mother-son bonding—time spent in the boat looking for shady spots and continually untangling my line. We talked about our lives and I held my breath each time he had a nibble. I didn’t catch anything but he had caught about twenty small Sunnies that I admired as he held them up until each were unhooked and released back into the cool, dark water.
Invigorated by this experience, the next morning I suggested an outing in the Bear Mountain region because I knew he liked to hike. He took me up on it and we ascended a path labeled “challenging.” I willed every last remaining muscle in my core to heave my middle aged body upward; he would look back and say, “You okay?” to which I replied, “Great! I love hiking.” The truth was I never hiked even though we live a stone’s throw away from the Appalachian Trail.
After the hike we went to a local farmer’s market and purchased two whole black bass for dinner. True we hadn’t caught them, but it felt like we might have. Or we should have. It seemed that we finally liked all the same things. That evening as my husband started up the charcoal, my son showed me how to season, grease, stuff and score the fish for the fire. I had never actually taught him to cook but I realized that he had picked it up over the years by watching me and through trial and error.
The next morning he had to catch an early train back to Baltimore and I woke eager to drive him to the station. My husband was already dressed and had made him toast and tea when I showed up in the kitchen. I wanted to make him a big breakfast to keep him in good stead until he arrived back at his apartment but he declined. The toast was all he wanted.
I thought that all my feelings of separation anxiety had long passed with the ceremonial freshman year drop off, the ceremonial graduation, the ceremonial move into the first apartment, first job, etc. But suddenly those recently buried and laid to rest emotions all came rushing back at me and I saw both a grown man and a ten-year-old boy converge. He was showered and shaved and neatly dressed with his tidy bag packed at his feet and a fishing pole in one hand.
The only difference was that my arguments for a good breakfast and against flagging a taxi with a six-foot long pole to make a connection at Penn Station went unheeded. I decided against joining them on the ride to the station. It was better like this where I was unable to fret as he maneuvered the bag and pole out of the car and onto the commuter train to Grand Central. We hugged and he left. I watched the car pull away as the sun rose over the trees across the lake. Then I went fishing.