I try to choose homes with a view. Our first apartment in Windsor Terrace, Brooklyn was on the top floor of a third floor walkup. During the 1985 centennial celebration of the Statue of Liberty we hosted a roof-top party with a clear line view of New York Harbor. Our friends ate, drank and danced to fireworks but what they really talked about was the view.

Then we moved out to the North Fork of Suffolk County and we had to walk around the corner to the view. The Long Island Sound stretched out endlessly from the tops of enormous beach boulders. The winter was cold and lonely for newlyweds who missed city life but the view of the Sound helped sustain us that entire year. I still miss it.

Our next apartment was a dump in Yonkers in a crummy neighborhood where I made the mistake of staring at a neighbor’s Mohawk haircut a few seconds too long. The girl shouted out every time she saw me.

“Hey lady, what’re you staring at?”

It worsened when the girl stared calling out to Rob.

“Hey, man what is your wife staring at?”

“There really is no good answer to that question,” Rob said.

For obvious reasons we only lived there a year as well but the backdoor faced out into an expansive valley with colorful houses that dotted the landscape. I could sit on the back staircase free to watch the sunset each night with no thought of seeing “the girl.”

We moved to Hastings-on Hudson and for nine years we gazed at the Palisades out two picture windows. I used to stand in a darkened kitchen in the middle of the night and watch the flashing green lights on the passing barges. It didn’t matter if it was a blizzard, you would find the slow, steady chug of the barges as a source of comfort. 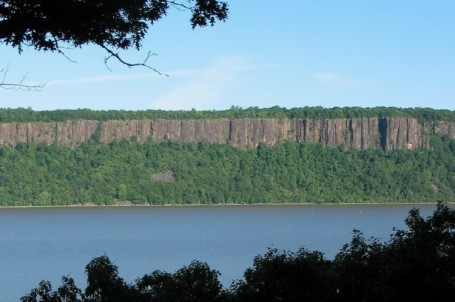 In 1997 we moved to White Plains and lived on the top floor of a house that was built on the highest point of land in the entire city. From our veranda we had a line of site view of the World Trade Center Towers. We bought our lake house and moved away before they came down and I’m glad we weren’t there anymore to be constantly reminded. Because when you have something in your daily view you start to feel like it belongs to you. The Japanese refer to this as a “borrowed landscape.”

The best way to appreciate a borrowed landscape is to leave it. Once you return the relationship strengthens. We recently returned from a trip to Seattle to visit my brother and his wife. Their beautiful house rests on the top of Sixth Avenue in Edmonds, Washington with a partial view of the Puget Sound.

“It is,” my bother agreed. “But if we could tear that house down it would be an even better view.” 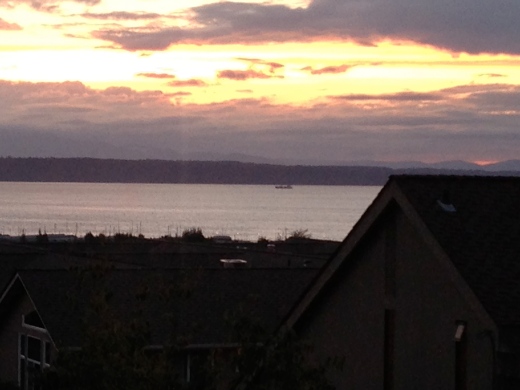 View from Chris and Sonia’s House

The point was hard to argue except everybody blocks someone, somewhere. But their view still boasted a daily surveillance of the Kingston Ferry traveling back and forth and the sun setting over the Puget Lowland, hard to beat. While I was there I found myself taking some ownership of their view and I started to miss my own so I knew it was time to leave. Traveling provides views of every variety and most of them aren’t meant to last, which is why we buy postcards and take photographs. Even stationary views are altered by light and shadow. Our most impressive view was of Mt. Rainier at sunset that Rob took from the airplane window as we began our descent into Seattle. It isn’t one anyone is likely to see again anytime soon.