When you buy an old house it’s a forgone conclusion that you’re going to have handymen in your life. Where you find them depends on circumstance, friendship, good or bad luck and poor judgment. As a first time homeowner I did the one thing everyone tells you not to do. I looked in the Pennysaver. I found George. No last name was ever given and when we tried to track him down it turned out the address of his business didn’t exist. But I’m getting ahead of myself.

When George arrived, I directed his attention to the strip of lawn that consisted of a few patches of crabgrass struggling to compete with the dandelions and plantains. “We were thinking of putting a walkway along here and a patio in the backyard,” I said pointing.

George grunted a monosyllabic sound as he looked at the ground.

Taking this as encouragement I added, “I’m thinking red brick. It would be so charming, don’t you think?”

George pulled a folded brochure out of his back pocket and pointed to a picture of an interlocking patio resting up against a multimillion dollar house and yard.

“Well… I guess that could work,” I said slowly.

“And I want half up front.”

I nodded and backed away afraid I would jinx the deal.

“It’s all settled,” I proclaimed to Rob who had been avoiding any encounter with George.

“Maybe we should get another price,” Rob suggested. “Did he give you a written estimate?”

Rob was on a roll. “Did he give you any references?”

“And you found him in the Pennysaver?”

“Well who did you find?” I asked to no response. “Exactly!” I smirked. “And isn’t that the point of the Pennysaver? So there’s no problem.”

We soon learned what the problem was when he started the job. Sometime during the first hour of work our neighbor came over and asked George to fix his steps across the street. George agreed and the next day his men showed up for work at our neighbor’s house instead of ours. The day after that he moved onto third job. Everyone had paid him half upfront and nobody’s work was complete. Our neighbor tried to sue him and we learned the phone number listed in the Pennysaver was now out of service. Then our neighbor tried to convince us to pay for their lost payment to George and have us deduct that amount from George’s remaining bill.

“That’s insane,” Rob finally chimed in. “Why would we do that?”

“You stole him!” he countered.

When George and his workers did show up again he nickel-and-dimed each step proclaiming it wasn’t part of the original price. For example, the Belgium block border he pointed to in the glamorous brochure picture was an additional ten dollars a block installed. The work in our yard was eventually finished but the experience was so stressful and overpriced I vowed never to use the Pennysaver again.

My next brainchild was to hire the man who left a hand written index card in our screen door. It read:

Gutters cleaned and a phone number.

“Our gutters are a mess and this guy said front and back, fifty-bucks.”

“Get a reference,” Rob said.

“Ooo…kay,” I said, knowing I had already hired him.

The next day Glenn showed up with his sidekick Jerry and the roof and gutters were cleaned within half an hour. They took their money and that would have been the end of it but I was so happy to have two eager workers readily available. I asked about chopping wood. There was still the business of the fallen tree in the lower yard.

On the coldest day of the year, Glenn and Jerry drank Pepsi, smoked cigarettes and chopped a two hundred year old Maple tree into hundreds of fireplace-sized logs. They worked all day with nary a break and climbed the steps to our home with frozen fingers and sweating brows. They sat in the kitchen drinking hot chocolate and I gave them the cash they deserved. Glenn always took the money and paid Jerry himself.

I thought I had found the handyman dream team so when the Spring rolled around I called Glenn (the boss) and lined up a series of jobs: a deer fence, cement repair, re-gravel the driveway and painting the decks.

They started the work with reckless abandon barely stopping to eat or drink. Danger signs were everywhere but I kept ignoring them. We saw them sneak into the woods at odd moments, reappear and sneak off again. Their speech was garbled on occasion and they smoked constantly and downed liters of Pepsi but avoided solid food as far as I could tell. They argued a lot until Glenn would say, “Who’s running this job site anyway?” Jerry always backed down. 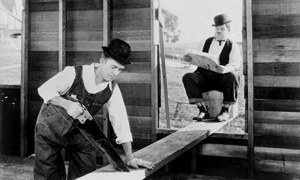 They showed up with black eyes on more than one occasion from what was described as a “friendly fight” the night before.

“Boys will be boys,” Glenn said, when I expressed concern.

One day I arrived home from work and Rob was waiting for me.

“Go look over the deck,” he said stony faced.

I peered over the deck at the splayed body of Glenn spread eagled on the steps leading into the yard.

Since Glenn and Jerry started working for us we had learned a few things about them. Jerry had bad teeth and lived in a  house with other transients. Glenn wore expensive clothes from L.L. Bean and had parents who continued to monitor and support him even though he was thirty-six. They both had DUI’s and were dropped off by Glenn’s father, or they walked. Sometimes gypsy cabs rolled up to get them. Still I kept hiring them because they showed up, had reasonable rates and workers were hard to find. As the Spring had worn on the quality of the work began to fall off. The previous week they had raked a lot of the gravel meant for our pull-off over to the neighbor’s curb. Now, utterly perplexed, I stared down at Glenn’s lifeless body.

Rob walked up behind me. “He’s drunk, well he was until he passed out.”

“Drunk, drugged, what’s the difference?” Rob said. “I saw Jerry stumbling away from our house on my way home and knew something was wrong.”

“No he’s breathing, I checked.”

We tried to rouse him to no avail.

“Should we call his parents?” I asked.

“I was thinking police! You never learn your lesson when you hire people. No references, no licenses. If they fall off our roof who get’s sued? We do!”

Some time later Glenn opened his eyes, stumbled up onto our deck and slurred out a long incoherent song he had written that was going to make him famous. I made him some ice tea which he filled with half a cup of sugar and never drank. He chained smoked sitting at our table like an invited guest and told us things about his “woman” nobody would want to know. Finally we coaxed him into the car and Rob drove him to his parents.

His parents never acknowledged the episode but invited us over to play Parcheesi like were Glenn’s new friends. We politely declined.

At one point Glenn quit being a boss and went to work for Cutco Knives. He begged us to let him come over and listen to his pitch. We nervously acquiesced. He cut a penny with a scissor and one half flew into the air and hit me. Then he struggled to saw a piece of rope in half with a knife. We were supposed to be so impressed with his demonstration that we would be persuaded to spend hundreds of dollars on Cutco knives.

“Neat,” Rob said without an ounce of encouragement.

“My parents bought this whole line,” he said, pointing to a six-hundred dollar knife set in a catalogue. “These are the best steak knives in the world.”

His sales pitch was complete.

We did buy a “Japanese” vegetable knife for one hundred and sixty-one dollars and change. We had to help him fill out the order form. He called and told us he had won an award for best new recruit because of our knife and his parents’ set. Unfortunately they represented his first and last sales.

I’d like to write that he went into rehab and we never hired him again but that would be untrue. Glenn and Jerry still came calling a few more times and we offered small jobs with little chance of accidents. Eventually Glenn’s parents sold their home and moved away and Glenn apparently with them. I don’t know what happened to Jerry but he’s probably better off without his boss.

As for us, all repairmen are now hired by Rob from a reliable reference. It takes a while because their calendars are pretty booked but there’s a lot less drama. The best handymen are worth the wait.