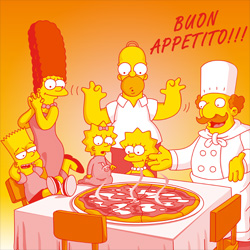 If I had in my possession all the money I ever spent eating out in restaurants I would be a rich woman but I don’t regret most of it. My biggest regret in life is the money I’ve spent eating out in bad restaurants. Little did I know that moving to Putnam County I would be embarking on an epicurean’s wasteland. As two parents working fulltime jobs with a healthy commute and other time spent shuttling our charges to one lesson, rehearsal or activity after another we invariably threw up our hands in desperation and headed out to eat. Living where we live this is much easier said than done. When we moved into the lake house there wasn’t a single restaurant in our actual town- just delis and they almost all sold pizza.

The seller of our house told us the best pizza was located in a tiny strip mall across from the roundabout about a mile out of town. It was called Al Forno’s Brick Oven Pizza. He said it should not be confused with Forno III Pizza which was closer. Neither should be confused with The Original Al Forno which packed up and moved to a town further south. At some point all three owners of the Al Forno Pizza parlors worked in the same place but some bad blood passed between them and they splintered into three separate feuding restaurants. 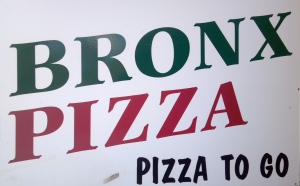 Both places claimed to make pizza like “The Bronx” whatever that is and in the end both places were pretty bad. If you went into either one the owner went into a ten minute diatribe about how the other Al Forno’s owner was a crook and couldn’t make pizza. Now normal house buyers would not put a lot of stock into which pizza was superior when buying a house but we listened to the seller and for a while the one by the roundabout was the spot.

The four corners of main street had a car repair shop on one side, an historic house that failed as a restaurant on the opposite, a hair salon called Untamed on the third corner and Maria’s Deli on the fourth. Maria was a super grouchy woman who spoke with a thick Italian accent and supported her large family from the proceeds of the deli. She made her own Italian bread. It was a bit cakey and had a very distinctive taste but she often sold it warm and we occasionally bought it. Based upon the success of her bread she decided to expand into a full scale bakery inside the deli. She made fancy cakes and cookies and displayed them under a glass counter in the back of the store.

“Weeell…” I demurred. “We do have a birthday coming up.”

“You want the cake?” she snapped.

“Okay.” Something about Maria’s crankiness made me want her to like me even more.

After dinner I surprised the family with the cake. As I served it I explained that Maria was going to launch a full line of baked goods.

“So now we have a bakery in town which is something we actually need…what?” I asked looking at Rob’s face. “It’s no good?”

“It tastes just like her Italian bread except with sugar.”

“Does she just have a one size fits all dough recipe?” he asked. We avoided Maria’s for a while. Not surprisingly the bakery idea died. Maria decided to start making pizza. She expanded her deli as they pushed through to the closed up flower shop next door and installed a large pizza oven. When you went in to buy milk or a sandwich she told you about her pizza business that was coming soon. In addition to the fighting Fornos the town had a smattering of small delis servicing each lake community and each of those delis sold pizza. 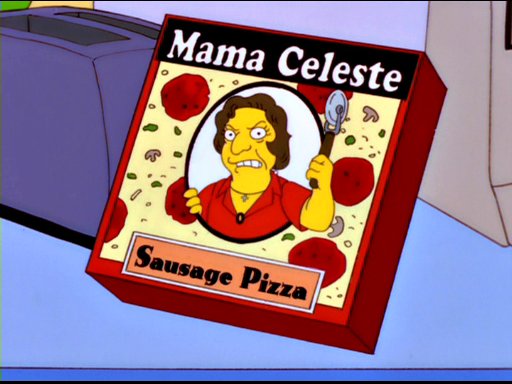 Maria seemed almost pleasant for a brief period anticipating her new venture until the historic house across from the repair shop reopened as a…you guessed it, a pizza parlor called Pizza and Pasta.

This pizza parlor had something all the other places didn’t have, tables. Not to be outdone, Maria charged forward with her plans and by the time she opened up she had set up some plastic tables in the front of the deli but more people went to Pizza and Pasta.

After the first week of Pizza and Pasta, Forno III put a banner out offering free Pepsi with each pie. Then Maria hung a sign in her window that offered two pies for the price of one. Around this same time Al Forno’s Brick Oven near the roundabout started to look very grubby and we stopped going altogether.

Pizza and Pasta made a sign that said, BYOB and free salads with each pie. So Maria upped her offer to include two pizzas and two liters of soda for fifteen dollars. Then another small deli about two miles before the main corner decided to start selling pizza and they offered one large pie with two liters of soda for ten dollars and they delivered for free. They weren’t on the same block as the other three but they did start to siphon off customers who lived closer to their store.

“That certainly smells good.” I offered when I stopped inside Maria’s one afternoon. You can see I never learned to keep my mouth shut. The result was the same. Pizza that tasted like her bread and cake dough. It was as if she flattened out the bread into a pie pan and put tomato sauce on top.

So we went to the restaurant with table service, free salads and our own wine. Until the time we ordered a Marguerita pie which consisted of a can of crushed tomatoes spread over the dough with a sprinkling of basil on top. When we questioned the waitress she explained that it was the chef’s personal version.

“It’s a can of crushed tomatoes on dough,” we said.

Pizza and Pasta closed within a year for lack of business.

Apparently most people didn’t like pizza that tasted like cake batter either because Maria closed up the pizza portion of her business a few weeks later and the feuding Fornos went back to life as normal. During this period a bagel shop opened across the parking lot from Marias and they siphoned off the A.M. buttered roll crowd. Now less people had a reason to put up with a crotchety Maria. Eventually she closed her deli altogether and moved away. 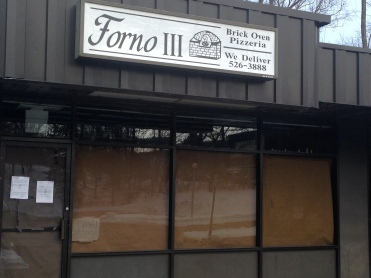 As for us we stopped eating pizza and most bread products about this time and maybe other people did too. Or maybe they crossed the county line and ate pizza at any number of other available pizza options. We went from a glut of pizza choices to very few when they ran each other out of business. Forno III closed up and remains an empty shop because they owed the landlord back rent. Forno’s Brick Oven Pizza was sold and now has a glowing neon sign in the window that says WINGS. Maria’s Deli turned into a small grocery store that doesn’t sell pizza and the bagel shop closed last year as well. A bar opened up where the restaurant was but as far as I know they don’t serve pizza. The service station closed because the owner owed the county eight hundred thousand dollars in back taxes. The town supervisor has tried in vain to get a developer to move in and open a brew pub. I could be wrong but I don’t think that will ever happen.

On Friday nights driving north to a childless house I never think about pizza anymore. Then last week I passed by the empty store where the bagel shop stood and saw a sign; Coming Soon Nonna’s Pizza. 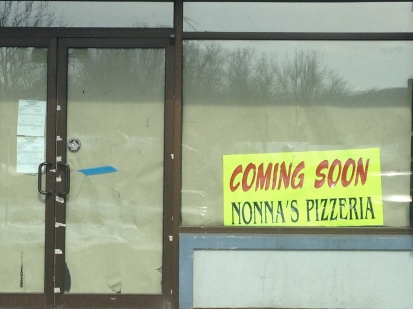