Katherine Hepburn’s character Tracy Lord, in The Philadelphia Story refers to a yacht saying, “my, she was yar.” Then she explains to her fiancé, George, what she’s talking about. It’s a telling moment. We learn that he’s not the man for her because he doesn’t know what yar means.  A majority of the audience for this 1940 movie needed to have it explained as well. It’s clear that most of America, like George, is moving with a different crowd than Tracy Lord. Lately I’ve been feeling like that with the New York Times.

The paper gets delivered to our house at roughly five-thirty every morning. You can hear the driver’s car roar around the lake followed by a dull thud on the street as the paper hits the driveway and the engine roars off again. I find the sound comforting  as I press the snooze bar for the third time. It gives me another reason to get up. Rob has moved on to electronic venues so the physical paper is mine alone. Reading the paper from 6:15 to 6:30 every morning doesn’t give you a lot of time to delve too deeply.  Today I read about rolling bar carts. 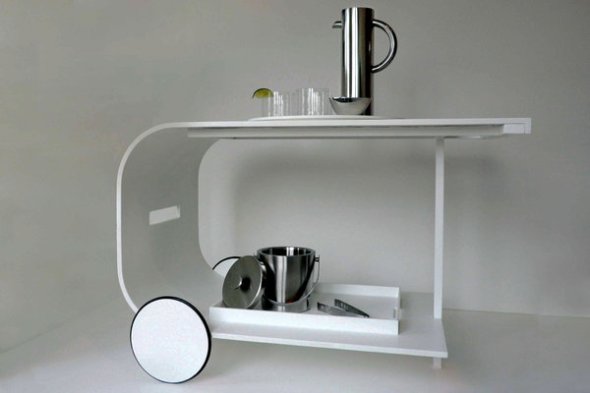 “Oh Robert, would you be so kind and roll in the bar cart and mix us all a cocktail.”

Would you use one for small gatherings as well as large? The article interviewed Alessandro Palazzi, the barman from Dukes Bar in London. “The style is very important, because it is used as a decoration or to show off your drink collection,” he said.

Well that explains it. My bar doesn’t contain a collection that lasts longer than the length of a party and it’s usually contained on the card table I set up for the occasion. I mused about the possibility of buying a rolling cart as I started to scroll through the pictures displaying the range of styles available. That’s what the Home section is for, to help you imagine the possibility of owning something you had never thought of before like an exotic tree house or a radiator that’s made to look like a ram for only $11,000.

The bar carts were priced from $300.00 which seemed a bit high but low enough so I could still be a player, and went up to $17,500.00. Most were in the several thousand dollar range. I felt like George in The Philadelphia Story.

I thought about the driver who has to get up at 4 AM to get all the papers in our area delivered on time. Every Christmas we send twenty-dollars to our carrier to ensure this great service.  It seems like a tough job. Last year we had a terrible delivery person and the paper didn’t show up consistently until close to nine in the morning. We were on the phone with the Times every day until they resolved the problem. They never disputed our claim and sent the complaint up to the head office. Boy was I impressed, the New York Times really wanted me us as a customer.

But I often can’t imagine why. I always knew the ads were for the One Percent but I think I blocked out the fact that so are the houses, wine, clothes, most restaurant reviews and the vacations they write about. And it seems to be getting worse. I also noticed that full page ads for Tiffany’s, Bonwit Teller or Bloomingdale’s are juxtaposed to  stories about impoverished nations but never next to national or local news. I feel the ad placement is deliberate because expensive items next to the Neediest Cases might be a “tough sell.” Rob thinks the companies just want ads in the first ten pages of the paper and that happens to be the international section. 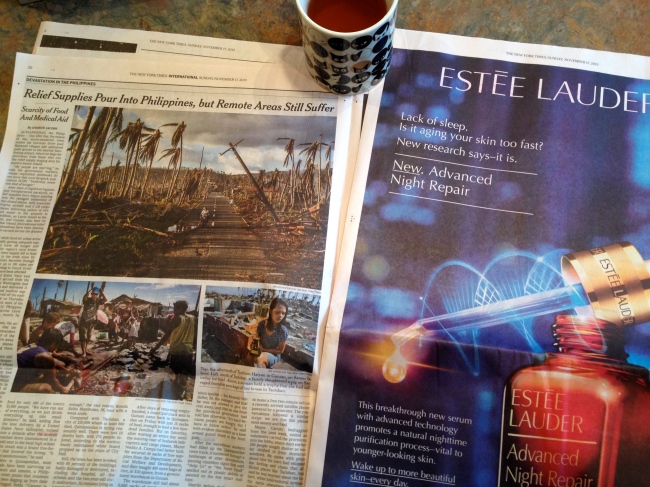 On Sunday the second part of the weekend paper arrives. I open up the main section and snap a picture. I make my way through this section and test my ad theory. Then I move along to the Sunday Review where the only ads are for education jobs. I land on an editorial called “Sentenced to a Slow Death.” It begins with, “If this were happening in any other country, Americans would be aghast…” I read about the needless life sentences of non-violent offenders that is costing $1.78 billion dollars for the lives of their collective incarcerations. This is why I read my local paper. The news is for everyone. We have to gerrymander through it to find what we’re interested in.

That doesn’t mean I can’t imagine inching a bar cart around my small lake house and saying, “My, isn’t she yar?” and hope someone is listening.